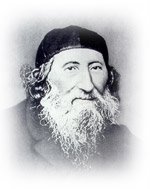 Rabbi Kalischer, a talmud of R. Akiva Eiger, saw an intrinsic connection between the national aspirations of the Jewish people and the traditional messianic belief. He viewed the developments of rising nationalism among the Jewish people as one of the first stages in the process of natural redemption, i.e., that process by which man himself would help bring about the beginning of redemption in which at least some Jews would return to Eretz Israel.

In 1862 Rabbi Kalischer published his work Drishat Tzion. The purpose of this work was to make people aware of the beginning of the redemption through natural means and it was time to return to Eretz Yisrael.

"The Redemption of Israel, for which we long, is not to be imagined as a sudden miracle. The Almighty, blessed be His Name, will not suddenly descend from on high and command his people to go forth. He will not send the Messiah from heaven in a twinkling of an eye, to sound the great trumpet for the scattered of Israel and gather them into Jerusalem. He will not surround the Holy City with a wall of fire or cause the Holy Temple to descend from the heavens. The bliss and miracles that were promised by his servants, the prophets, will certainly come to pass – everything will be fulfilled – but we will not run in terror and flight, for the Redemption of Israel will come by slow degrees and the ray of deliverance will shine forth gradually.

"What straining of our faith would there be in the face of the miracles and wonders attending a clear heavenly command to go up and inherit the land and enjoy its good fruit? Under such circumstances what fool would not go there, not because of his love of God, but for His own selfish sake? Only a natural beginning of the Redemption is a true test of those who initiate it. To concentrate all one’s energy on this holy work and to renounce home and fortune for the sake of living in Zion before the voice of gladness and the voice of joy are heard – there is no greater merit or trial than this.

"Another great advantage of agricultural settlement is that we would have the privilege of observing the religious commandments that attach to working the soil of the Holy Land. The Jews who supervised the actual laborers would be aiding in the working of the land and would therefore have the same status as if they had personally fulfilled these commandments.
But, beyond all this, Jewish farming would be a spur to the ultimate Messianic Redemption. As we bring redemption to the land in a this-worldly way, the rays of heavenly deliverance will gradually appear.

"Let no stubborn opponent of these thoughts maintain that those who labor day and night will be taken away from the study of the Torah and from spiritual to secular concerns. This counter argument is shortsighted. On the contrary, the policy we propose will add dignity to the Torah. If there is no bread, there can be no study; if there will be bread in the land, people will then be able to study with peace of mind.

"If we strengthen ourselves and go to the Holy Land to plant, build, establish and grow, our eyes will see the blessing upon our fields, and we will have blessing to no end, and we shall be praised with praises of the Holy Land – and through this the redemption of Israel will come!

Source: The above information and photo was taken directly from the World Mizrachi Website http://www.mizrachi.org/aboutus/leaders/ravkalischer.asp