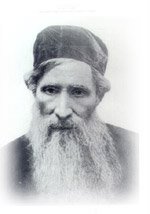 Rabbi Shmuel Mohilever learned in the famed Volozhin Yeshiva and became Rabbi of Bialystock in 1883. He was among the first founders and leaders of the Hibbat Zion movement and served as the force behind the religious faction within the movement. His lifework planted the seeds which would later germinate into the Mizrachi movement under Rabbi Jacob Reines.

"Almost all of our sages (poskim) have agreed with the opinion of the MaHaRit that even in our times we are commanded to go up to Eretz Yisrael. Therefore I was much surprised at some of the great leaders of our nation who are learned in Torah and Hasidut, when they expressed opposition to living in the Holy Land and causing its reclamation by buying field and vineyards for Jewish farmers to settle upon it. They based such opposition on the fact that a majority of these farmers, specifically the young ones, don't adhere to the Torah. Their words are not correct, for it has already been written that the Holy One Blessed Be He would rather His children remain in the land, even though they do not keep His commandments, than reside in the Diaspora and keep the commandments."

Address to the First Zionist Congress (1897)

"The basis of Hibbat Zion is the Torah, as it has been handed down to us from generation to generation, with neither supplement nor subtraction. I do not intend this statement as an admonition to any individual regarding his conduct, for, as our sages have said: "Verily, there are none in this generation fit to admonish." I am nevertheless stating in a general way, that the Torah, which is the Source of our Life, must be the foundation of our regeneration in the land of our fathers.

In conclusion, I lift up my voice to my brethren : Behold, it is now two thousand years that we await our Messiah, to redeem us from our bitter exile and to gather our scattered brethren from all corners of the earth to our own land, where each shall dwell in security, under his vine and under his fig tree. This faith, strong within us, has been our sole comfort in the untold days of our misery and degradation. And even though in the last century some have arisen in our midst who have denied this belief, tearing it our of their hearts and even erasing it from their prayers, the masses of our people hold fast to this hope, for the fulfillment of which they pray morning, noon and night, and in which they find balm for their suffering. Of late certain orthodox rabbis have arisen in western Europe, among whom one has even declared that the promises of future bliss and consolation made by our seers were in the form of symbols and parables.


The coming of the Messiah, they say, will not be to bring Israel back to the Land of its Fathers and put an end to its long dispersion and many sorrows, but will be to establish the Kingdom of Heaven for all mankind, while Israel continued in exile as a light to the gentiles. Others of these rabbis assert, without qualification, that nationalism is contrary to our belief in the advent of the Messiah. I am therefore constrained to declare publicly that all this is not true. Our hope and faith has ever been and still is, that our Messiah will come and gather in all the scattered of Israel, and instead of our being wanderers upon the face of the earth, ever moving from place to place, we shall dwell in our own country as a nation, in the fullest sense of the word. Instead of being the contempt and mockery of the nations, we shall be honored and respected by all peoples of the earth. This is our faith and hope, as derived from the words of our prophets and seers of blessed memory and to this our people clings!"

Source: The above information and photo was taken from the World Mizrachi Website http://www.mizrachi.org/elearning/View_history.asp?id=121

Anonymous comments will be removed. Please leave a name with your comment.