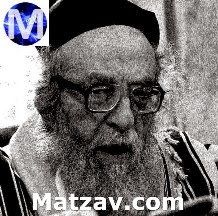 The following excerpt is from Aish.com article titled "The Rabbi and the Professor - A True Story of Israel Remembrance Day"

The year was 1982. Once again, Israel was at war. Soldiers were mobilized, reserve units activated. Among those called to duty was a Reserves soldier, a university student who made his living as a high school teacher: Shlomo Aumann, Professor Yisrael Aumann's son.

On the eve of the 19th of Sivan, in particularly fierce combat, Shlomo fell in battle. Rav Gustman mobilized his yeshiva: All of his students joined him in performing the mitzvah of burying the dead.

The family had just returned from the cemetery and would now begin the week of shiva -- mourning for their son, brother, husband and father. (Shlomo was married and had one child. His widow, Shlomit, gave birth to their second daughter shortly after he was killed.) Rav Gustman entered and asked to sit next to Professor Aumann, who said: "Rabbi, I so appreciate your coming to the cemetery, but now is time for you to return to your Yeshiva."

Rav Gustman spoke, first in Yiddish and then in Hebrew, so that all those assembled would understand: "I am sure that you don't know this, but I had a son named Meir. He was a beautiful child. He was taken from my arms and executed. I escaped. I later bartered my child's shoes so that we would have food, but I was never able to eat the food -- I gave it away to others. My Meir is a kadosh -- he is holy -- he and all the six million who perished are holy."

Rav Gustman then added: "I will tell you what is transpiring now in the World of Truth in Gan Eden -- in Heaven. My Meir is welcoming your Shlomo into the minyan and is saying to him ‘I died because I am a Jew -- but I wasn't able to save anyone else. But you -- Shlomo, you died defending the Jewish People and the Land of Israel.' My Meir is a kadosh, he is holy -- but your Shlomo is a Shaliach Zibbur – a Cantor in that holy, heavenly minyan."